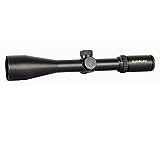 Rudolph Optics Varmint Hunter VH 4-16 x 50 30mm Riflescope Tube with T3 Reticle, Black
The Varmint Hunter VH 4-16×50 Scope with T3 Reticle is the ultimate hunting riflescope when shooting over medium and long distances. The high-performing target optics features very efficient light transmission and an extremely wide magnification range, it fulfills all requirements when shooting by day or in twilight. The long eye relief of the VH 4-16×50 also makes it very suitable for the big caliber rifles.

About the Rudolph Optics Company

Rudolph Optics is a premium maker for rifle scopes, optics, mounts, and other accessories used for firearms like rifles and long guns. They design and supply their mounts, scopes, and related products using building materials which are long lasting and durable. This includes the Rudolph Optics Varmint Hunter VH 4-16 x 50 30mm Riflescope Tube with T3 Reticle, Black by Rudolph Optics. For additional shooting products, visit their website.

Rifle scopes enable you to precisely align a rifle at different targets by aligning your eye with the target at range. They accomplish this through magnifying the target by utilizing a series of lenses within the scope. The scope’s alignment can be dialed in for consideration of separate environmental factors like wind and elevation increases to make up for bullet drop.

The scope’s function is to help shooters understand exactly where the bullet will land based on the sight picture you are viewing with the optic as you line up the scope’s crosshair or reticle with the intended point of impact. The majority of modern-day rifle scopes have about 11 parts which are arranged within and outside of the optic. These parts include the rifle scope’s body, lenses, elevation turrets, objective focus rings, and other parts. Learn about the eleven parts of rifle glass.

Rifle scopes can be either “first focal plane” or “second focal plane” type of optics. Finding the perfect type of rifle optic is based around what type of shooting you plan to do.

First focal plane scopes (FFP) come with the reticle before the magnification lens. This causes the reticle to increase in size based on the level of magnification being used. The result is that the reticle measurements are the same at the magnified range as they are at the non magnified distance. As an example, one tick on a mil-dot reticle at one hundred yards without “zoom” is still the same tick at 100 yards using 5x “zoom”. These kinds of scopes are beneficial for:

Second focal plane optics (SFP) feature the reticle to the rear of the magnifying lens. This triggers the reticle to remain at the same overall size in relation to the level of magnification being used. The effect is that the reticle measurements change based on the magnification used to shoot over lengthier distances since the markings present various increments which differ with the magnification. In the FFP example with the SFP scope, the 5x “zoom” one hundred yard tick would be 1/5th of the non “zoom” tick. These particular styles of scopes are useful for:

A single power rifle scope or optic will have a zoom number designator like 4×32. This indicates the magnification power of the scope is 4x power and the objective lens is 32mm. The magnification of this kind of scope can not fluctuate considering that it is a fixed power scope.

Variable power rifle scopes can be tweaked between magnified levels. The power adjustment is accomplished by the power ring part of the scope near the rear of the scope by the eye bell.

Here are some suggested scope powers and the distances where they may be effectively used. High power optics will not be as efficient as lower magnification level scopes considering that too much zoom can be a bad thing. The same relates to longer distances where the shooter needs increased power to see precisely where to best aim the rifle at the target.

All cutting-edge rifle scope lenses are covered. Lens covering is a crucial aspect of a rifle’s setup when thinking about high end rifle optics and scope equipment.

Some rifle scope suppliers even use “HD” or high-def glass coverings which apply various processes, polarizations, components, and chemicals to extract different color ranges and viewable definition through lenses. This HD finishing is typically used with higher density glass which reduces light’s capability to refract by means of the lens glass. Some scope makers use “HD” to describe “ED” signifying extra-low dispersion glass. ED handles how colors are represented on the chroma spectrum and the chromatic difference or aberration which is similarly called color distortion or fringing. Chromatic aberration may be obvious around things with hard edges and shapes as light hits the item from various angles.

About Single Finish Versus Multi-Coating

Different optic lenses can also have different finishings applied to them. All lenses generally have at least some type of treatment or coating applied to them before they are used in a rifle scope or optic.

Single layered lenses have a treatment applied to them which is typically a protective and boosting multi-purpose treatment. This lens treatment can shield the lens from scratches while lowering glare and other less advantageous things experienced in the shooting environment while sighting in with the scope. The quality of a single covered lens depends upon the scope maker and the amount you spent on it. Both the manufacturer and amount are signs of the lens quality.

Some scope makers also make it a point to define if their optic lenses are layered or “multi” coated. Being “better” depends on the maker’s lens treatment innovation and the quality of materials used in constructing the rifle scope.

Water on a lens does not assist with preserving a clear sight picture through a scope at all. Numerous top of the line and military grade scope makers will coat their lenses with a hydrophobic or hydrophilic finishing.

Options for Mounting Optics on Firearms

Mounting options for scopes come in a few options. There are the standard scope rings which are separately mounted to the scope and one-piece scope mounts which cradle the scope. These different types of mounts also normally can be found in quick release versions which use toss levers which allow rifle operators to rapidly mount and remove the optics.

Standard, clamp-on design mounting scope rings use hex head screws to fix to the flattop design Picatinny scope mount rails on rifles. These varieties of scope mounts use two independent rings to support the scope, and are usually constructed from 7075 T6 billet aluminum or similar materials which are designed for long distance precision shooting. This kind of scope mount is ideal for rifles which need a durable, unfailing mount which will not shift no matter just how much the scope is moved or jarring the rifle takes. These are the type of mounts you want for a specialized optics setup on a long distance scouting or interdiction firearm which will almost never need to be altered or recalibrated. Blue 242 Loctite threadlocker can also be used on the screws to protect against the hex screws from wiggling out after they are mounted safely in position. An example of these mounting rings are the 30mm type from Vortex Optics. The set usually costs around $200 USD

These kinds of quick-release rifle scope mounts can be used to quickly connect and detach a scope from a rifle. Multiple scopes can also be swapped out if they all use a similar style mount. The quick detach design is CNC crafted from anodized 6061 T6 aluminum and the mounting levers connect tightly to a flat top design Picatinny rail. This allows the scope to be sighted in while on the rifle, taken off of the rifle, and remounted back on the rifle while preserving the original sighting settings. These kinds of mounts come in practical for shooting platforms which are hauled around a lot, to remove the glass from the rifle for protection, or for sight systems which are adopted between several rifles. An example of this mount style is the 30mm mount designed by the Vortex Optics brand. It typically costs around $250 USD

Moisture inside your rifle optic can wreck a day of shooting and your expensive optic by causing fogging and producing residue inside of the scope’s tube. The majority of scopes prevent moisture from entering the optical tube with a series of sealing O-rings which are waterproof. Typically, these water-resistant scopes can be submerged under 20 or 30 feet of water before the water pressure can push moisture past the O-rings. This should be sufficient humidity prevention for common use rifles, unless you intend on taking your rifle aboard a watercraft and are worried about the optic still functioning if it goes overboard and you can still rescue the firearm.

Another component of preventing the accumulation of moisture inside of the rifle scope tube is filling the tube with a gas like nitrogen. Given that this space is currently occupied by the gas, the scope is less altered by temperature level changes and pressure variations from the external environment which could potentially allow water vapor to leak in around the seals to fill the void which would otherwise be there. These are good qualities of a decent rifle scope to seek out.