Airsoft snipers can be some of the most devastating players on the airsoft field. When able to use sniper field craft successfully, a sniper can quickly eliminate many opposing players before their position is revealed. An example of this is famed airsoft sniper CleanShot who is known for his skills and abilities with bolt action airsoft guns. He can single handily hold a choke point or objective as he sends players back to their respawn point. Let's talk about how to be an airsoft sniper.

Airsoft sniper rifles usually have the longest range and highest FPS (feet-per-second) out of all of the airsoft rifle types. These airsoft guns are usually single-shot and require a high level of skill to use on the airsoft field. If you miss your shot, chances are high the other airsoft player will find and shoot you before you have a change to follow up with another shot.

The skill's and play style of an airsoft sniper are based around patience and waiting for the perfect shot. Snipers usually do not run-and-gun or go in "guns blazing". Instead, they support their team by blending into their surroundings, quietly waiting, and sneaking around the airsoft field while eliminating easy kills and engaging targets of opportunity.

A good airsoft sniper will make use of their long-range airsoft gun to frustrate and annoy the opposing team while maintaining an excelling kill to death average ratio (KDA). They are rarely seen, consistently shift their positions to maintain surprise, and often only noticeable by the large number of players dying in an area of the airsoft field. All this is made possible by their airsoft sniper rifle's capabilities.

The high FPS and extreme range while shooting airsoft BBs is possible because of airsoft sniper rifles' extremely long barrels. These barrels usually have tighter bores and tolerances which allow less air to escape around the airsoft BB after it is fired and is traveling down the barrel and out of the gun's bore (end of the airsoft barrel).

Need A Sniper Rifle? Check Out These Best Sellers

Many airsoft sniper rifles come with these tight bore barrels preinstalled. If you are looking to accurize your rifle even further or build out a custom airsoft sniper rifle, you can find aftermarket barrels made out of stainless steel and other materials.

If your airsoft sniper rifle shoot around 450 FPS with 0.20g airsoft BBs, it will be lower while using heavier weight BBs like +0.28g. It is good to use a chronograph (chrono) with your sniper rifle while testing different BB weights so you know you limits and ratios. Write these numbers down.

Some airsoft fields limit rifles based on FPS limits so make sure your BB velocities are within their guidelines and rules. They also usually have a special category of airsoft gun with FPS limits for single-shot sniper rifles. Bigger airsoft fields may have onsite chronos so you know your limits. Be sure to ask field staff with any questions you have before playing.

Also keep in mind that your airsoft BB choice when sniping must take into account several more things like weather and ground cover. Think about the weather. Is it windy? Wind will affect your airsoft BB flight path. Heavier BB weights do well in wind. Look at the foliage on the airsoft field. Are you shooting through leaves, bushes, and vegetation? Lighter BBs are affected by hitting leaves more than heavier BBs.

The two most common types of airsoft sniper rifles are spring and gas powered rifles. This is because single most sniper rifles are single shot, powerful propellant systems are needed to shoot the airsoft BBs down the rifle barrel when the gun is fired.

Spring sniper rifle use powerful spring weights of M130 to M190 to forcefully shoot airsoft BBs out of the rifle's barrel. Every time the rifle bolt is cycled, the gun's spring is compressed and a new airsoft BB is loaded into the chamber.

This spring guide below from Airsoft Facts and Science helps us understand more about how spring sniper rifle power affects FPS. Remember FPS limits are set by airsoft fields and you must follow their guidelines.

Gas airsoft sniper rifles are usually powered by CO2 or green gas. The gas is stored in the rifles magazine or stock (depend on the rifle model). These rifles use the gas as the propellant to fire the airsoft BBs. However, gas guns are not as popular as spring rifles due to increased maintenance, valve sealing problems, and more expensive manufacturing cost. 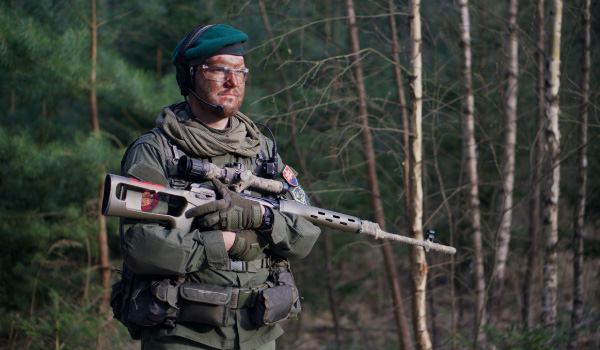 How To Be An Effective Airsoft Sniper

A sniper is only as good as they are effective. This includes moving around stealthily. Rarely being seen, and shot accuracy. Remember practice makes perfect and good airsoft sniper skills are not acquired overnight. Many airsoft snipers have refined their snipe tradecraft, accuracy, rifle upgrades, and know-how for a very long time.

Having The Right Equipment and Gear

A good sniper needs a good rifle and equipment. Get a solid VSR-10 upgradable platform with some workable optics (it's an airsoft gun so don't spend a lot). Upgrade your rifles FPS to local field limits. This depends on your area so call your local airsoft field with any questions about FPS and safety before upgrading your gun. This will help avoiding un-upgrading your gun later if you push the limits with a "hot" weapon.

Knowing the airsoft field is important as an airsoft sniper. Setup on a chokepoint or high traffic enemy area. Engage the opposing team from cover or concealment (depending on what's available). Keep moving and stay one step a head of your opponents while moving around. Don't be in the same place when they come back from respawning!

Positioning As A Sniper and Movement

Understand the best ways to position as an airsoft sniper. This includes using rooms of buildings as cover in MOUT areas or similar fields with rooms. In these places, shoot from inside the room and avoid sticking your rifle barrel out of a window where it is visible. In forested areas, use camouflage to your advantage and move around quickly and quietly. You can also use a ghillie suit if needed to blend in better, but these suits also make it hard to move quickly.

Operating As An Airsoft Sniper

Put all of the skills and knowledge together to begin operating as an airsoft sniper. This includes knowing when your area is "burned" and the opposing team knows you are there. Leave the area and move to a better spot where they are less aware if possible. Also, know when to transition to a pistol or sidearm if you don't need the longer range of your rifle. Pistols come in handy when moving room-to-room in a building or CQB (close quarters combat) situation. Don't forget to sling your rifle and transition back for long shot opportunities.

Is your sniper loadout ready to go?

Check out CleanShot to see how your airsoft sniper gear setup compares to his loadout.

See how airsoft guns work internally and learn about science.

Learn All About Airsoft Guns