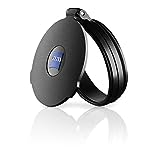 About the Zeiss Scope Maker

Zeiss is a premium manufacturer for rifle scopes, optics, mounts, and other add-ons used for guns like rifles and long guns. They create and make their scopes, mounts, and related products choosing building materials which are long lasting and durable. This includes the Zeiss Victory V8/HT Flip-up Rifle Scope Objective Lens Cover, 50mm by Zeiss. For more shooting items, visit their website.

What You Need to Know About Glass

Rifle scopes enable you to exactly align a rifle at various targets by lining up your eye with the target over a range. They accomplish this through magnification using a set of lenses within the scope. The scope’s positioning can be dialed in for the consideration of many environmental elements like wind speed and elevation increases to make up for bullet drop.

The scope’s function is to help the shooter understand exactly where the bullet will hit based on the sight picture you are seeing with the optic as you align the scope’s crosshair or reticle with the intended point of impact. Many modern rifle scopes have around 11 parts which are found within and externally on the scope body. These parts include the rifle scope’s body, lenses, elevation turrets, focus rings, and other parts. Learn about the eleven parts of optics.

Rifle scopes can be either “first focal plane” or “second focal plane” type of scopes. Choosing the optimal type of rifle optic depends on what type of shooting you plan to do.

Focal plane scopes (FFP) feature the reticle in front of the magnifying lens. This induces the reticle to increase in size based upon the extent of magnification being used. The benefit is that the reticle measurements are the same at the amplified distance as they are at the non amplified range. As an example, one tick on a mil-dot reticle at one hundred yards without any “zoom” is still the exact same tick at one hundred yards with 5x “zoom”. These kinds of scopes work for:

Second focal plane scopes (SFP) come with the reticle behind the magnification lens. In the FFP example with the SFP scope, the 5x “zoom” one hundred yard tick would be 1/5th of the non “zoom” tick measurement.

The measure of scope zoom you need depends on the type of shooting you choose to do. Just about every style of rifle glass provides some level of magnification. The quantity of zoom a scope gives is identified by the diameter, thickness, and curvatures of the lens glass inside of the rifle optic. The magnifying level of the optic is the “power” of the opic. This implies what the shooter is aiming at through the scope is amplified times the power element of what can generally be seen by human eyes.

A single power rifle scope will have a magnification number designator like 4×32. This suggests the zoom power of the scope is 4x power while the objective lens is 32mm. The magnification of this type of scope can not change given that it is a fixed power scope.

Variable power rifle scopes can be tweaked between magnified settings. The power adjustment is accomplished by using the power ring part of the scope near the rear of the scope by the eye bell.

Here are some recommended scope powers and the ranges where they can be efficiently used. High power optics will not be as useful as lower powered glass considering too much zoom can be a bad thing. The same concept goes for extended ranges where the shooter needs to have adequate power to see exactly where to best aim the rifle.

All modern rifle scope and optic lenses are coated. There are various types and qualities of glass finishings. When researching luxury rifle scope systems, Lens finish can be a very important element of defining the rifle’s capability. The lenses are one of the most important pieces of the optic as they are what your eye sees through while sighting a rifle in on the target. The covering on the lenses shields the lens exterior as well as helps with anti glare capabilities from refracted sunrays and color discernibility.

Some optic suppliers even use “HD” or high-def lense coatings which employ different processes, components, rare earth compounds, and polarizations to extract various color ranges and viewable definition through the lens. This high-def coating is normally used with increased density glass which brings down light’s chance to refract by means of the lens glass. Some scope manufacturers use “HD” to describe “ED” implying extra-low dispersion glass. ED deals with how certain colors are represented on the chromatic spectrum and the chromatic aberration or deviance which is similarly called color distortion or fringing. Chromatic aberration can be visible over things with well defined outlines as light hits the object from various angles.

Different optic lenses can also have different finishes applied to them. All lenses typically have at least some type of treatment or covering applied to them prior to being used in a rifle scope or optic.

This lens treatment can offer protection to the lens from scratches while minimizing glare and other less useful things experienced in the shooting environment while sighting in with the scope. The quality of a single layered lens depends on the scope manufacturer and how much you paid for it.

Some scope manufacturers similarly make it a point to define if their optic lenses are coated or “multi” coated. Being “better” depends on the producer’s lens treatment technology and the quality of materials used in developing the rifle scope.

What to Know About Hydrophobic Finishing

Water on a lens does not help with preserving a clear sight picture through a scope whatsoever. Lots of top of the line and premium scope producers will coat their lenses with a hydrophobic or hydrophilic covering. The Steiner Optics Nano-Protection is a fine example of this sort of treatment. It treats the exterior surfaces of the Steiner scope lens so the H2O molecules can not bind to it or produce surface tension. The result is that the water beads sheet off of the scope to preserve a clear, water free sight picture.

Mounting options for scopes come in a few choices. There are the standard scope rings which are individually installed to the scope and one-piece scope mounts which cradle the scope. These different types of mounts also generally are made in quick release versions which use toss levers which allow rifle operators to rapidly mount and remove the scopes.

Standard, clamp style mounting scope rings use hex head screws to mount to the flattop style Picatinny scope installation rails on rifles. These types of scope mounts use a couple of separate rings to support the optic, and are made from 7075 T6 billet aluminum which are designed for long distance accuracy shooting. This type of scope mount is great for rifles which require a durable, sound mounting solution which will not move no matter how much the scope is moved or abuse the rifle takes.

These types of quick-release rifle scope mounts can be used to quickly remove a scope from a rifle and reattach it to a different rifle. Several scopes can also be switched out if they all use a complementary style mount. The quick detach mount style is CNC machined from anodized 6061 T6 aluminum and the mounting levers connect firmly to a flat top design Picatinny rail. This lets the scope to be sighted in while on the rifle, removed from the rifle, and remounted back on the rifle while preserving the original sighting settings. These kinds of mounts come in practical for rifles which are hauled around a lot, to take off the optic from the rifle for protection, or for aiming systems which are adopted between several rifles. An example of this mount style is the 30mm mount from the Vortex Optics manufacturer. It normally costs around $250 USD

Moisture inside your rifle scope can mess up a day of shooting and your expensive optic by bringing about fogging and producing residue inside of the scope tube. Many scopes prevent wetness from entering the scope tube with a system of sealing O-rings which are water resistant.

Another component of avoiding the buildup of wetness inside of the rifle scope’s tube is filling the tube with a gas like nitrogen. Given that this area is currently taken up by the gas, the glass is less influenced by temp changes and pressure differences from the outside environment which might possibly permit water vapor to seep in around the seals to fill the vacuum which would otherwise be there. These are good qualities of a good rifle scope to seek out.