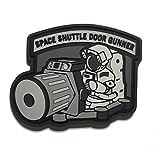 The PVC/Rubber Tactical Space Shuttle Door Gunner Patch Combat Army Morale (Hook/Loop) Patch
Space Shuttle Door Gunner, a term usually referring to those whom like to falsely brag about some cool job position or experience. Alternatively, the thought of actually being a space shuttle door gunner always sounds rad! Hook sewn on the back Hook backing FITS perfect on…

Morale patches enable you to embellish your tactical gear in the field and are team comradery boosters. These patches are styled around things like motion picture quotes, memes, amusing sayings, quips, and other off-the-cuff remarks. The patch design style differs and includes text, images, and graphics.

Tactical groups, airsoft squads, and military units generally have a team patch or patch set. Pick a basic group of patches including a few morale patches which represent your unit if you are a team leader. You can use these group patches for group acknowledgment, awards, achievements, and rank advances. It is a great way to build camaraderie within your unit. You can also keep a few spares on-hand for swapping patches with patch collectors, friendly units, or allied groups.

The majority of special missions, military operations, or airsoft tournaments generally have their own patches. Unit members or game players who use these patches have the status that comes from finishing that mission, task, or tour of duty. When the mission took place, Mission patches are an excellent way to highlight who participated.

The majority of morale patches connect to equipment, uniforms, tactical vests, and bags using Velcro or hook and loop attachment backing. The hook side is normally found on the back of the patch with the loop attachment side on the bag, uniform, or vest panel. Other types of patches include iron-on and sew-on. Iron-on patches use an adhesive glue-like backing which heats up to adhere to the positioning spot. Sew-on patches need to use heavy duty sewing machines and matching thread to connect to a uniform or BDU blouse.

Morale patch material depends upon the producer. The main front of the patch normally includes embroidered thread or PVC plastic material. The edges of the patch are stitched and the back is generally a Velcro loop backing panel.

Patches like the The PVC/Rubber Tactical Space Shuttle Door Gunner Patch Combat Army Morale (Hook/Loop) Patch made by the Empire Tactical USA normally hold up pretty well. Make sure to trim any loose threads to keep the patch stitching or embroidered patch edges from coming undone or unraveling. You can attempt to trim or anchor any loose threads to extend the patch’s service life.

It is an excellent plan to take off Velcro patches prior to washing since the wear and tear of a washing machine can be hard on the patch. To clean detachable PVC patches with Velcro attachments, remove the patch from the equipment.

Question: Where is the The PVC/Rubber Tactical Space Shuttle Door Gunner Patch Combat Army Morale (Hook/Loop) Patch patch made?
Answer: Unless otherwise stated, the patches are made in East Asia. Check the product description for more information.

Question: What kind of products are morale patches constructed of?
Answer: Morale patches are normally made of several types of material consisting of embroidered fabric, PVC plastic, thread, rubber, and other similar fabric products.