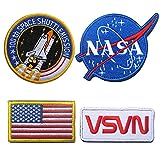 Tactical NASA Patches Lot with American Flag Morale Patches Hook and Loop (4 Pcs)
Size:4 Pcs
The red v-shaped vector represents aeronautics.
The circular orbit around the agency’s name represents space travel.
NASA used the “worm” logo from 1975 until 1992. After it was introduced, the blue “meatball” was the most common and classic symbol of NASA.
Please be aware that NASA patch may not be used to state or imply the endorsement by NASA or used in any manner that might mislead.
We guarantee 100% shopping satisfaction with Easy Return & Refund by using FBA service.
Your feedback might be helpful to others and save their time.

Morale patches enable you to embellish your tactical gear in the field and are confidence boosters. These patches are styled around things like motion picture quotes, memes, funny expressions, quips, and other off-the-cuff remarks. The patch design style consists of and differs text, images, and graphics.

Tactical teams, airsoft squads, and military units normally have a team patch or patch set. Select a basic group of patches consisting of a few morale patches which represent your unit if you are a group leader. You can use these team patches for team recognition, awards, achievements, and rank advances. It is an excellent way to grow comradery within your unit. You can also keep a few spares on-hand for exchanging patches with patch collectors, friendly units, or allied teams.

The majority of special missions, military campaigns, or airsoft tournaments typically have their own patches. Unit members or players who display these patches have the reputation that comes from finishing that campaign, mission, or assignment. Mission patches are a good way to highlight who participated when the mission took place.

Most morale patches attach to equipment, uniforms, tactical vests, and bags using Velcro or hook and loop attachment backing. Stitch-on patches must use heavy duty sewing machines and matching thread to attach the patch to a uniform or BDU blouse.

Morale patch material depends upon the producer. The primary front of the patch normally includes embroidered thread or PVC plastic material. The edges of the patch are sewn and the back is generally a Velcro loop backing area.

Patches like the Tactical NASA Patches Lot with American Flag Morale Patches Hook and Loop (4 Pcs) made by the Monte Everest generally hold up pretty well. Make sure to cut any loose threads to keep the patch stitching or embroidered patch edges from coming undone or unraveling. You can try to trim or anchor any loose threads to extend the patch’s service life.

It is a great plan to remove Velcro patches before washing considering that the wear and tear of a washing machine can be hard on the patch. To clean removable PVC patches with Velcro attachments, remove the patch from the gear.

Question: Where is the Tactical NASA Patches Lot with American Flag Morale Patches Hook and Loop (4 Pcs) patch made?
Answer: Unless otherwise mentioned, the patches are made in East Asia. Look at the product description for additional information.

Question: What type of materials are morale patches made out of?
Answer: Morale patches are normally made of several types of material including embroidered cloth, PVC plastic, thread, rubber, and other similar fabric products.