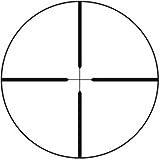 About the SWAROVSKI Brand

SWAROVSKI is a premium producer for long gun scopes, optics, mounts, and other accessories used for guns like rifles and long guns. They design and build their products by choosing materials which are resilient and long lasting. This includes the Swarovski Z6 2.5-15x44mm Riflescopes by SWAROVSKI. For additional shooting products, visit their site.

Rifle scopes allow you to exactly aim a rifle at different targets by lining up your eye with the target over a range. They do this through magnification by utilizing a set of lenses inside the scope. The scope’s alignment can be adapted to account for varied environmental considerations like wind speed and elevation increases to account for bullet drop.

The scope’s function is to help shooters understand precisely where the bullet will land based upon the sight picture you are seeing via the scope as you line up the scope’s crosshair or reticle with the intended target. A lot of modern-day rifle optics have about eleven parts which are arranged internally and outside of the scope. These optic pieces consist of the rifle scope’s body, lenses, windage turrets or dials, focus rings, and other components. See all eleven parts of an optic.

Rifle scopes can be either “first focal plane” or “second focal plane” type of optics. Considering the best type of rifle scope is based around what type of shooting you plan on doing.

Focal plane scopes (FFP) feature the reticle in front of the zoom lens. This triggers the reticle to increase in size based upon the amount of magnification being used. The result is that the reticle measurements are the same at the magnified range as they are at the non magnified range. For example, one tick on a mil-dot reticle at one hundred yards with no “zoom” is still the corresponding tick at 100 yards using 5x “zoom”. These kinds of scopes work for:

Second focal plane scopes (SFP) come with the reticle behind the magnifying lens. This triggers the reticle to stay at the exact same dimensions in relation to the volume of magnification being used. The end result is that the reticle dimensions shift based on the magnification chosen to shoot over lengthier ranges considering that the markings present different increments which differ with the magnification level. In the FFP illustration with the SFP optic, the 5x “zoom” one hundred yard tick measurement would be 1/5th of the non “zoom” tick measurement. These particular styles of scopes work for:

The amount of scope magnification you require depends on the style of shooting you like to do. Virtually every type of rifle scope gives some level of zoom. The volume of zoom a scope delivers is identified by the dimension, density, and curvatures of the lenses within the rifle scope. The magnifying level of the optic is the “power” of the opic. This suggests what the shooter is observing through the scope is amplified times the power element of what can generally be seen by human eyes.

A single power rifle optic and scope uses a zoom number designator like 4×32. This indicates the zoom power of the scope is 4x power and the objective lens is 32mm. The magnification of this kind of optic can not adjust because it is a fixed power optic.

Variable power rifle scopes can be modified between magnified settings. The power change is accomplished by the power ring part of the scope near the back of the scope by the eye bell.

Here are some advised scope power levels and the distances where they may be successfully used. High power rifle scope glass will not be as efficient as lower magnification optics due to the fact that too much zoom can be a negative aspect depending on your shooting distance. The same concept goes for longer distances where the shooter needs to have sufficient power to see exactly where to properly aim the rifle.

All modern-day rifle scope lenses are coated. There are various types and qualities of glass lens coatings. When considering luxury rifle scope systems, Lens finish can be a significant aspect of a rifle. The glass lenses are one of the most essential parts of the glass because they are what your eye looks through while sighting a rifle in on the point of impact. The finishing on the lenses protects the lens surface as well as improves anti glare capabilities from excess light and color recognition.

Some optic manufacturers also use “HD” or high-def lense finishes which make the most of various processes, rare earth compounds, polarizations, and aspects to draw out different color ranges and viewable target visibility through the lens. This HD coating is normally used with greater density lens glass which reduces light’s ability to refract through the lens glass. Some scope suppliers use “HD” to refer to “ED” suggesting extra-low dispersion glass. ED deals with how certain colors are represented on the chroma spectrum and the chromatic aberration or deviance which is also called color distortion or fringing. Chromatic aberration is often obvious over things with hard edges and outlines as light hits the item from particular angles.

Different optic lenses can even have different coverings applied to them. All lenses generally have at least some kind of treatment or finishing applied to them before they are used in a rifle scope or optic assembly. This is because the lens isn’t simply a raw piece of glass. It is part of the finely tuned optic. It requires a coating to be applied to it so that it will be efficiently usable in numerous types of environments, degrees of sunlight (full light VS shaded), and other shooting conditions.

This lens treatment can protect the lens from scratches while decreasing glare and other less helpful things experienced in the shooting environment while sighting in with the scope. The quality of a single covered lens depends on the scope manufacturer and how much you paid for it.

Some scope manufacturers similarly make it a point to define if their optic lenses are layered or “multi” covered. Being “much better” depends on the manufacturer’s lens treatment innovation and the quality of products used in building the rifle scope.

Water on a lens doesn’t help with maintaining a clear sight picture through a scope at all. Numerous top of the line and high-end scope companies will coat their lenses with a hydrophobic or hydrophilic covering which is water repellent.

Installing options for scopes can be found in a few options. There are the basic scope rings which are separately mounted to the scope and one-piece mounts which cradle the scope. These various kinds of mounts also normally are made in quick release versions which use manual levers which permit rifle shooters to quickly mount and remove the scope.

Standard, clamp type mounting optic rings use hex head screws to install to the flattop style Picatinny scope mount rails on rifles. These types of scope mounts use double detached rings to support the optic, and are made from 7075 T6 billet aluminum or similar materials which are designed for far away precision shooting. This kind of scope mount is excellent for rifle systems which require a durable, rock solid mount which will not shift regardless of just how much the scope is moved or abuse the rifle takes. These are the design of mounts you should have for a specialized scope system on a reach out and touch someone hunting or interdiction long gun which will pretty much never need to be modified or adjusted. Blue 242 Loctite threadlocker can also be used on the screws to keep the hex screws from wiggling out after they are installed safely in position. An example of these rings are the 30mm type from the Vortex Optics company. The set usually costs around $200 USD

These types of quick-release rifle scope mounts can be used to rapidly take off a scope and connect it to a different rifle. Several scopes can even be swapped out if they all use a similar style mount. These types of mounts are convenient for long guns which are transferred a lot, to remove the optic from the rifle for protecting the scope, or for scopes which are used in between numerous rifles.

Wetness inside your rifle glass can destroy a day of shooting and your costly optic by causing fogging and creating residue inside of the scope tube. The majority of optics prevent wetness from going into the optical tube with a series of sealing O-rings which are water resistant. Usually, these scopes can be submerged within 20 or 30 feet of water before the water pressure can push moisture past the O-rings. This should be ample humidity avoidance for standard use rifles, unless you plan on taking your rifle boating and are worried about the scope still performing if it goes overboard and you can still salvage the gun.

Another element of preventing the accumulation of wetness within the rifle scope tube is filling the tube with a gas like nitrogen. Since this space is already occupied by the gas, the glass is less affected by climate changes and pressure distinctions from the outdoor environment which could possibly enable water vapor to seep in around the seals to fill the void which would otherwise be there. These are good qualities of a good rifle scope to look for.