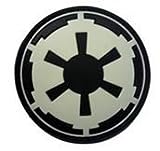 Star Wars Imperial Galactic Empire Morale Military Patch 3D PVC Rubber Tactical Rubber Hook Patch (Noctilucous)
Color:Noctilucous
First Class Mail includes tracking and is shipped in a package.
We are committed to providing quality products at fair prices. We value each and every customer that buys through us. We will ensure that you are satisfied. If there is a problem we will do what it takes to make sure you are happy. Please contact us if there is any problem with your purchase before leaving negative feedback or immediately opening a dispute. We will reply you in 24 hours and solve the problem.
We work relentlessly. If there is any problem please apologize. Hope all customers will be happy with our products.

Morale patches enable you to embellish your tactical equipment in the field and are team comradery boosters. These patches are styled around things like film quotes, memes, amusing expressions, quips, and other off-the-cuff remarks. The patch design style differs and consists of text, images, and graphics.

Tactical groups, airsoft groups, and military units usually have a group patch or patch set. If you are a group leader, choose a standard group of patches consisting of a few morale patches which represent your unit.

Most special missions, military operations, or airsoft tournaments generally have their own patches. Unit members or airsoft players who wear these patches have the status that originates from completing that mission, assignment, or campaign. When the mission occurred, Mission patches are a great method to highlight who participated.

The majority of morale patches connect to equipment, uniforms, tactical vests, and bags using Velcro or hook and loop attachment backing. Sew-on patches must use heavy duty sewing machines and matching thread to attach the patch to a uniform or BDU shirt.

Morale patch material depends on the producer. The main front of the patch typically includes embroidered thread or PVC plastic material. The edges of the patch are stitched and the back is typically a Velcro loop backing panel.

Patches like the Star Wars Imperial Galactic Empire Morale Military Patch 3D PVC Rubber Tactical Rubber Hook Patch (Noctilucous) made by the Tactical PVC Patch usually hold up quite well. Make certain to trim any loose threads to keep the patch stitching or embroidered patch edges from coming undone or unraveling. You can try to trim or anchor any loose threads to extend the patch’s life expectancy. Anchoring a thread involves taking a threaded needle and stitching the thread back into the material a number of times. Sink the loose end of the thread so it cannot keep unraveling.

It is a great plan to remove Velcro patches prior to cleaning given that the wear and tear of a washing machine can be rough on the patch. To clean detachable PVC patches with Velcro attachments, take off the patch from the equipment.

Question: What kind of products are morale patches constructed of?
Answer: Morale patches are normally made of a couple of types of material including embroidered fabric, PVC plastic, thread, rubber, and other comparable fabric products.