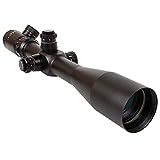 Sightmark Triple Duty Riflescope
Get closer to your target with the Sightmark Triple Duty 8.5-25×50 MDD Riflescope. Tested and recommended by the National Tactical officers Association, this high-power riflescope features a large 50mm objective lens and a Mil-Dot reticle that offers bright, crisp images at long distances. Designed for superior range estimation and long-distance shooting, the 8.5-25×50 Riflescope utilizes cutting-edge glass with fully multi-coated optics for exceptional clarity. The one-piece 30mm tube offers a wide field-of-view and fully multi-coated optics for a bright, crisp image. O-ring sealed and nitrogen-purged, the Triple Duty 8.5-25×50 Riflescope is both fog proof and water resistant. This precision scope features a parallax adjustment knob and oversized, locking windage and elevation turrets with 1/8-inch MOA clicks, providing an additional level of accuracy and ensuring that the scope stays zeroed. The Triple Duty series of riflescopes are complimentary to any shooter’s arsenal.

About the Sightmark Company

Sightmark is a premium maker for weapon scopes, optics, mounts, and other add-ons used for firearms like rifles and long guns. They create and supply their mounts and related products working with elements which are long lasting and resilient. This includes the Sightmark Triple Duty Riflescope by Sightmark. For additional shooting items, visit their site.

What You Need to Know About Rifle Glass

Rifle scopes enable you to specifically aim a rifle at various targets by lining up your eye with the target at range. They accomplish this through magnifying the target by utilizing a set of lenses inside the scope. The scope’s alignment can be adjusted to take into account many natural considerations like wind and elevation to account for bullet drop.

The scope’s function is to help shooters understand precisely where the bullet will hit based on the sight picture you are seeing via the scope as you align the scope’s crosshair or reticle with the intended point of impact. Most modern-day rifle optics have around 11 parts which are found internally and externally on the scope body. These scope parts include the rifle scope’s body, lenses, windage and elevation turrets or dials, focus rings, and other elements. See all eleven parts of a rifle optical system.

Rifle scopes can be either “first focal plane” or “second focal plane” style of scopes. The type of focal plane an optic has identifies where the reticle or crosshair lies in connection with the optic’s magnifying adjustments. It simply indicates the reticle is behind or in front of the magnification lens of the optic. Deciding on the very best form of rifle optic depends upon what form of shooting you intend on doing.

Focal plane scopes (FFP) feature the reticle in front of the magnification lens. These styles of scopes are useful for:

Second focal plane scopes (SFP) include the reticle to the rear of the magnification lens. In the FFP example with the SFP scope, the 5x “zoom” one hundred yard tick measurement would be 1/5th of the non “zoom” tick reticle measurement.

The quantity of scope magnification you need on your optic depends on the form of shooting you plan to do. Just about every type of rifle optic delivers some amount of zoom. The amount of magnification a scope gives is determined by the size, density, and curves of the lens glass within the rifle optic. The zoom of the optic is the “power” of the scope. This implies what the shooter is observing through the scope is magnified times the power factor of what can usually be seen by human eyes.

A single power rifle optic and scope uses a magnification number designator like 4×32. This suggests the magnification power of the scope is 4x power and the objective lens is 32mm. The magnification of this type of scope can not fluctuate given that it is a fixed power scope.

Variable power rifle scopes have adjustable power. It will note the magnification degree in a configuration like 2-10×32. These numbers indicate the zoom of the scope can be adjusted in between 2x and 10x power. This always includes the power levels in-between 2 and 10. The power modification is achieved by applying the power ring component of the scope near the rear of the scope by the eye bell piece.

Here are some suggested scope powers and the distances where they can be efficiently used. High power scopes will not be as useful as lower magnification scopes considering that too much magnification can be a negative aspect depending on your shooting distance. The very same idea goes for longer ranges where the shooter needs to have increased power to see precisely where to best aim the rifle at the target.

All state-of-the-art rifle optic lenses are covered. Lens finish is a significant aspect of a shooting system when thinking about high end rifle optics and scope systems.

Some glass suppliers additionally use “HD” or high-definition glass coverings that employ various procedures, chemical applications, polarizations, and aspects to draw out separate colors and viewable definition through the lens. This high-def covering is commonly used with higher density lens glass which decreases light’s potential to refract through the lens glass. Some scope makers use “HD” to describe “ED” signifying extra-low dispersion glass. ED deals with how certain colors are represented on the chroma spectrum and the chromatic aberration or difference which is also called color distortion or fringing. Chromatic aberration is often obvious around objects with well defined shapes as light hits the item from various angles.

Details on Single Coating Versus Multi-Coating

Different optic lenses can even have various coatings applied to them. All lenses typically have at least some type of treatment or finishing applied to them before being used in a rifle scope or optic. Because the lens isn’t simply a raw piece of glass, they require performance enhancing coatings. It becomes part of the finely tuned optic. It requires a coating to be applied to it so that it will be efficiently functional in numerous kinds of environments, degrees of light (full light VS shaded), and other shooting conditions.

Single coated lenses have a treatment applied to them which is normally a protective and enhancing multi-purpose treatment. This lens treatment can safeguard the lens from scratches while minimizing glare and other less advantageous things experienced in the shooting environment while sighting in with the scope. The quality of a single covered lens depends upon the scope producer and just how much you spent for it. Both the make and cost are indicators of the lens quality.

Some scope manufacturers likewise make it a point to define if their optic lenses are covered or “multi” coated. This implies the lens has had multiple treatments applied to the surfaces of the glass. If a lens gets several treatments, it can prove that a maker is taking several actions to combat various natural elements like an anti-glare coating, a scratch resistant anti-abrasion covering, followed by a hydrophilic covering. This also doesn’t always mean the multi-coated lens will perform better than a single coated lens. Being “better” hinges on the maker’s lens treatment techniques and the quality of components used in creating the rifle optic.

Water on a scope’s lens doesn’t support retaining a clear sight picture through a scope at all. Many top of the line and premium optic manufacturers will coat their lenses with a hydrophilic or hydrophobic finish. The Steiner Optics Nano-Protection is a fine example of this sort of treatment. It deals with the surface area of the Steiner glass lens so the H2O particles can not bind to it or create surface tension. The result is that the water beads move off of the scope to preserve a clear, water free sight picture.

Installing approaches for scopes can be found in a couple of choices. There are the basic scope rings which are separately installed to the optic and one-piece scope mounts which cradle the scope. These various types of mounts also generally come in quick release versions which use manual levers which permit rifle shooters to quickly install and remove the scopes.

Standard, clamp-on design mounting scope rings use hex head screws to position to the flattop style Picatinny scope mounting rails on the tops of rifles. These forms of scope mounts use a pair of independent rings to support the scope, and are normally constructed from 7075 T6 billet aluminum which are developed for far away precision shooting. This type of scope mount is ideal for rifle systems which are in need of a durable, unfailing mount which will not change despite just how much the scope is moved about or jarring the rifle takes. These are the type of mounts you should have for a devoted optics setup on a long distance scouting or competition firearm that will seldom need to be altered or recalibrated. Blue 242 Loctite threadlocker can additionally be used to protect against the hex screw threads from wiggling out after they are mounted safely in place. An example of these rings are the 30mm style from Vortex Optics. The set normally costs around $200 USD

These types of quick-release rifle scope mounts can be used to rapidly remove a scope and connect it to a different rifle. Numerous scopes can also be switched out if they all use a similar design mount. These types of mounts are convenient for rifle platforms which are transferred a lot, to remove the optic from the rifle for protecting the scope, or for scopes which are used between several rifles or are situationally focused.

Wetness inside your rifle optic can ruin a day of shooting and your pricey optic by causing fogging and creating residue inside of the scope tube. The majority of scopes avoid wetness from going into the scope tube with a system of sealing O-rings which are water resistant.

Another element of avoiding the accumulation of moisture inside of the rifle scope tube is filling the tube with a gas like nitrogen. Since this space is already occupied by the gas, the optic is less influenced by temperature changes and pressure distinctions from the outside environment which could potentially allow water vapor to seep in around the seals to fill the vacuum which would otherwise be there. These are good qualities of a decent rifle scope to look for.