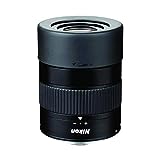 Nikon Monarch FIELDSCOPE MEP-30-MRAD Reticle Eyepiece
The new MONARCH MEP-30 reticle eyepiece allows a spotter to locate and focus on the same target in the reticle as the shooter and then communicate reference points and follow-up shot corrections. Can be fitted to straight or angled body 82mm or 60mm MONARCH Field scopes. 30x magnification on 82mm Field scope bodies and 24x magnification on 60mm Field scope bodies.

The MEP-30 FS-MRAD includes an integral FS-MRAD reticle with milling scale for highly detailed measurements of targets.
Glass Etched Reticle designed for fine detail that maintains color and contrast in all light conditions
Field Flattener delivers sharp images all the way to the edge of the field of view
Nitrogen Purged using nitrogen glass for total reliability against thermal shock and internal fogging

About the Nikon Company

Nikon is a premium company for long gun scopes, optics, mounts, and other add-ons used for firearms like rifles and long guns. They design and manufacture their scopes and related products by using materials which are long lasting and durable. This includes the Nikon Monarch FIELDSCOPE MEP-30-MRAD Reticle Eyepiece by Nikon. For more shooting products, visit their site.

Rifle scopes allow you to precisely align a rifle at various targets by lining up your eye with the target at range. They do this through zoom by employing a set of lenses within the scope. The scope’s alignment can be dialed in for the consideration of varied ecological things like wind speed and elevation increases to account for bullet drop.

The scope’s purpose is to help shooters understand precisely where the bullet will land based upon the sight picture you are seeing using the optic as you line up the scope’s crosshair or reticle with the intended point of impact. Most modern rifle scopes and optics have around eleven parts which are arranged within and on the exterior of the scope body. These parts include the rifle scope’s body, lenses, adjustment dials or turrets, focus rings, and other components. See all eleven parts of scopes.

Rifle scopes can be either “first focal plane” or “second focal plane” type of optics. Considering the best type of rifle optic is based on what type of shooting you plan on doing.

Focal plane scopes (FFP) feature the reticle in front of the zoom lens. These styles of scopes are useful for:

The level of scope zoom you need on your glass depends on the form of shooting you wish to do. Just about every kind of rifle scope gives some amount of magnification. The volume of magnification a scope provides is established by the dimension, density, and curvatures of the lens glass inside of the rifle scope. The magnification of the optic is the “power” of the opic. This denotes what the shooter is checking out through the scope is amplified times the power element of what can usually be seen by human eyes.

A single power rifle scope or optic will have a magnification number designator like 4×32. This indicates the zoom power of the scope is 4x power and the objective lens is 32mm. The zoom of this kind of optic can not change because it is set from the factory.

Variable power rifle scopes can be adjusted between magnification increments. These types of scopes will list the magnification degree in a format such as 2-10×32. These numbers mean the zoom of the scope can be changed between 2x and 10x power. This also involves the power levels in-between 2 and 10. The power adaptation is achieved by working with the power ring part of the scope near the back of the scope by the eye bell piece.

Here are some suggested scope power settings and the distances where they may be successfully used. Keep in mind that higher power optics will not be as practical as lower powered scope and optics because increased zoom can be a negative thing in certain situations. The exact same idea goes for extended ranges where the shooter needs to have adequate power to see exactly where to best aim the rifle.

All contemporary rifle glass lenses are covered. Lens covering can be a crucial element of a shooting platform when looking at high end rifle optics and scope setups.

Some scope brands likewise use “HD” or high-definition lens coverings which use different methods, chemicals, polarizations, and aspects to draw out various colors and viewable definition through the lens. Some scope manufacturers use “HD” to refer to “ED” indicating extra-low dispersion glass.

Different optic lenses can likewise have various coverings used to them. All lenses typically have at least some type of treatment or finish used to them prior to being used in a rifle scope or optic.

This lens treatment can safeguard the lens from scratches while reducing glare and other less useful things experienced in the shooting environment while sighting in with the scope. The quality of a single coated lens depends on the scope manufacturer and how much you paid for it.

Some scope makers also make it a point to specify if their optic lenses are coated or “multi” coated. This suggests the lens has several treatments applied to the surfaces of the glass. If a lens receives numerous treatments, it can indicate that a maker is taking multiple actions to fight various natural factors like an anti-glare finishing, a scratch resistant anti-abrasion finishing, followed by a hydrophilic finishing. This additionally doesn’t necessarily indicate the multi-coated lens will perform better than a single layered lens. Being “better” is dependent on the producer’s lens treatment innovation and the quality of materials used in developing the rifle optic.

Water on a lens does not assist with keeping a clear sight picture through a scope at all. Numerous top of the line and military grade optic companies will coat their lenses with a hydrophilic or hydrophobic coating.

Installing options for scopes come in a couple of options. There are the basic scope rings which are individually installed to the optic and one-piece mounts which cradle the scope. These different types of mounts also usually are made in quick release versions which use manual levers which enable rifle operators to quickly mount and remove the scopes.

Standard, clamp style mounting optic rings use hex head screws to install to the flattop style Picatinny scope mounting rails on the tops of rifles. These styles of scope mounts use double detached rings to support the optic, and are normally constructed from 7075 T6 billet aluminum which are made for far away accuracy shooting. This kind of scope mount is effective for rifles which are in need of a durable, hard use mount which will not change despite how much the scope is moved about or jarring the rifle takes. These are the style of mounts you really want to have for a dedicated optics system on a long distance hunting or competition long gun that will hardly ever need to be changed or recalibrated. Blue 242 Loctite threadlocker can also be used to protect against the hex screws from wiggling out after they are installed securely in place. An example of these mounting rings are the 30mm type made by the Vortex Optics brand. The set generally costs around $200 USD

These types of quick-release rifle scope mounts can be used to rapidly attach and detach a scope from a rifle. If they all use a comparable style mount, several scopes can often be swapped out. The quick detach mount style is CNC machined from anodized 6061 T6 aluminum and the mounting levers connect nicely to a flat top type Picatinny rail. This lets the scope to be sighted in while on the rifle, removed from the rifle, and remounted back on the rifle while preserving the original sighting settings. These kinds of mounts are useful and beneficial for rifles which are transported a lot, to take off the scope from the rifle for protection, or for sight systems which are used between several rifles. An example of this mount style is the 30mm mount from the Vortex Optics brand. It usually costs around $250 USD

Wetness inside your rifle optic can ruin a day of shooting and your costly optic by causing fogging and generating residue within the scope tube. Most scopes prevent wetness from going into the scope tube with a system of sealing O-rings which are waterproof. Generally, these scopes can be immersed underneath 20 or 30 feet of water before the water pressure can force moisture past the O-rings. This should be sufficient wetness avoidance for standard use rifles, unless you intend on taking your rifle boating and are worried about the optic still working if it is submerged in water and you can still recover the gun.

Another element of avoiding the accumulation of wetness inside of the rifle scope’s tube is filling the tube with a gas like nitrogen. Considering that this space is already occupied by the gas, the optic is less affected by condition shifts and pressure distinctions from the external environment which could potentially enable water vapor to seep in around the seals to fill the vacuum which would otherwise be there. These are good qualities of a decent rifle scope to look for.