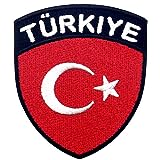 EmbTao Turkey Flag Shield Patch Embroidered National Morale Applique Iron On Sew On Turk Emblem
EmbTao Patch
Embroidery is a kind of art. Tao is the art of balance between design, technology, quality and details. EmbTao is the top embroidered patch.
EmbTao patch can be iron on or sew on to any garment. The backing has heat seal glue. It is very easy to iron on the garment. The glue is safe and non-toxic. Meanwhile, it has good wash performance. The ironed-on patches will not come off. Only 15 seconds, you can have your special DIY grament with EmbTao patch.
Package: 1 pcs embroidered patch packed in moisture proof bag.

Morale patches enable you to embellish your tactical equipment in the field and are camaraderie boosters. These patches are styled around things like motion picture quotes, memes, amusing expressions, quips, and other off-the-cuff remarks. The patch design style differs and includes text, images, and graphics.

Tactical teams, airsoft groups, and military units generally have a team patch or patch set. If you are a group leader, pick a basic group of patches including a couple of morale patches which represent your unit.

Most special missions, military operations, or airsoft tournaments normally have their own patches. Unit members or players who display these patches have the prestige that originates from finishing that operation, mission, or task. When the mission happened, Mission patches are a good method to highlight who attended.

The majority of morale patches attach to gear, uniforms, tactical vests, and bags using Velcro or hook and loop attachment backing. The hook side is typically located on the back of the patch with the loop attachment side on the vest, uniform, or bag panel. Other types of patches include iron-on and sew-on. Iron-on patches use an adhesive glue-like backing which heats up to stick to the placement area. Stitch-on patches should use sturdy matching thread and stitching machines to attach to a uniform or BDU shirt.

Morale patch material depends on the supplier. The primary front of the patch generally consists of embroidered thread or PVC plastic material. The edges of the patch are sewn and the back is typically a Velcro loop backing panel.

It is a great idea to take off Velcro patches prior to cleaning since the wear and tear of a washing machine can be tough on the patch. To clean detachable PVC patches with Velcro attachments, remove the patch from the gear.

Question: Where is the EmbTao Turkey Flag Shield Patch Embroidered National Morale Applique Iron On Sew On Turk Emblem patch made?
Answer: Unless otherwise stated, the patches are made in East Asia. Look at the product description to learn more.

Question: What kind of products are morale patches constructed out of?
Answer: Morale patches are usually made of a few kinds of material consisting of embroidered fabric, PVC plastic, thread, rubber, and other similar textile materials.