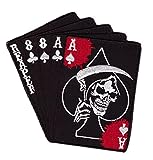 Morale patches allow you to decorate your tactical gear in the field and are confidence boosters. These patches are styled around things like movie quotes, memes, funny expressions, quips, and other off-the-cuff remarks. The patch design style includes and varies text, images, and graphics.

Tactical groups, airsoft groups, and military units normally have a group patch or patch set. If you are a group leader, choose a basic group of patches including a few morale patches which represent your unit. You can use these team patches for team acknowledgment, awards, achievements, and rank advances. It is an excellent method to create comradery within your unit. You can also keep a few spares on-hand for exchanging patches with patch collectors, friendly units, or allied groups.

Most special missions, military operations, or airsoft tournaments generally have their own patches. Unit members or players who wear these patches have the prestige that originates from completing that campaign, mission, or task. When the mission happened, Mission patches are a great method to highlight who was there.

The majority of morale patches attach to gear, uniforms, tactical vests, and bags using Velcro or hook and loop attachment backing. The hook side is generally found on the back of the patch with the loop attachment side on the vest, uniform, or bag panel. Other types of patches include iron-on and sew-on. Iron-on patches use an adhesive glue-like backing which warms up to adhere to the positioning area. Stitch-on patches need to use sturdy matching thread and sewing machines to attach to a uniform or BDU shirt.

Morale patch material depends on the producer. The primary front of the patch generally includes embroidered thread or PVC plastic material. The edges of the patch are sewn and the back is usually a Velcro loop backing.

Patches like the Dead Man’s Hand Reaper Dead Card Aces Patch [Velcro Brand Fastener] by Miltacusa made by the Miltacusa usually hold up quite well. Make sure to trim any loose threads to keep the patch stitching or embroidered patch edges from coming reversed or unraveling. You can try to trim or anchor any loose threads to extend the patch’s life expectancy.

A lot of morale patches are machine washable. This consists of any patches sewn onto uniforms or connected to equipment. Nevertheless, it is a good choice to remove Velcro patches before washing since the wear and tear of a washing machine can be tough on the patch. To wash removable PVC patches with Velcro attachments, take off the patch from the gear. Clean with warm soapy water, rub lightly, and pat the patch dry.

Question: Where is the Dead Man’s Hand Reaper Dead Card Aces Patch [Velcro Brand Fastener] by Miltacusa patch made?
Answer: Unless otherwise stated, the patches are made in East Asia. Examine the product description for more details.

Question: What type of materials are morale patches constructed of?
Answer: Morale patches are typically made of several types of material consisting of embroidered fabric, PVC plastic, thread, rubber, and other similar textile products.