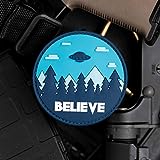 Believe UFO Aliens PVC Morale Patch – Hook Backed by NEO Tactical Gear
BELIEVE – NEO Tactical Exclusive. Patch is stitched to hook velcro, this is not glued like some other patches. When patch gets dirty – simply apply some liquid soap and some warm water and scrub off the debris.

About this item
NEO TACTICAL GEAR EXCLUSIVE – BELIEVE PVC Rubber Morale Patch by NEO Tactical Gear – High Quality Morale Patch – Hook Velcro Sewn On Back
PATCH DIMENSIONS 3″ IN DIAMETER. Great for fans of the UFO and alien culture.
MORALE PATCH COMES shipped in NEO Tactical Gear resealable retail packaging. Packaging is great to your patches in when not being used.
ADD THIS MORALE PATCH to your collection today!
BUY WITH CONFIDENCE satisfaction guaranteed. If you are not fully satisfied with the quality of our patch or the design, we will refund 100% of your money.

Morale patches allow you to decorate your tactical gear in the field and are self-confidence boosters. These patches are styled around things like film quotes, memes, amusing phrases, quips, and other off-the-cuff remarks. The patch design style consists of and varies text, images, and graphics.

Tactical groups, airsoft groups, and military units generally have a team patch or patch set. If you are a team leader, choose a standard group of patches including a few morale patches which represent your squad. You can use these team patches for group acknowledgment, awards, achievements, and rank advancements. It is a great way to create comradery within your unit. You can also keep a couple of spares on-hand for exchanging patches with patch collectors, friendly units, or allied groups.

The majority of special missions, military operations, or airsoft tournaments normally have their own patches. Unit members or airsoft players who use these patches have the status that comes from finishing that campaign, mission, or task. Mission patches are a good method to highlight who was there when the mission happened.

The majority of morale patches attach to equipment, uniforms, tactical vests, and bags using Velcro or hook and loop attachment backing. The hook side is usually seen on the back of the patch with the loop attachment side on the bag, vest, or uniform panel. Other types of patches consist of iron-on and sew-on. Iron-on patches use an adhesive glue-like backing which heats up to adhere to the positioning spot. Sew-on patches must use heavy duty matching thread and stitching machines to attach to a uniform or BDU blouse.

Morale patch material depends on the manufacturer. The main front of the patch typically consists of embroidered thread or PVC plastic material. The edges of the patch are stitched and the back is generally a Velcro loop backing area.

Patches like the Believe UFO Aliens PVC Morale Patch – Hook Backed by NEO Tactical Gear made by the NEO Tactical Gear usually hold up pretty well. Make sure to trim any loose threads to keep the patch stitching or embroidered patch edges from coming undone or unraveling. You can attempt to cut or anchor any loose threads to extend the patch’s longevity.

It is a good plan to take off Velcro patches before cleaning considering that the wear and tear of a washing machine can be hard on the patch. To clean removable PVC patches with Velcro attachments, take off the patch from the gear.

Question: Where is the Believe UFO Aliens PVC Morale Patch – Hook Backed by NEO Tactical Gear patch made?
Answer: Unless otherwise specified, the patches are made in East Asia. Read the item description for more information.

Question: What type of products are morale patches constructed of?
Answer: Morale patches are normally made of a couple of kinds of material including embroidered fabric, PVC plastic, thread, rubber, and other comparable textile products.