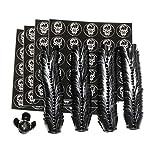 Made out of plastic.
100pcs of Wad + 100pcs of Sealing Paper.
Suitable for APS CAM870 Airsoft Shell Ejecting Gas Shotgun Shells.
Weight – Approx 80g
Go to the middle left of the page to see the full Product Description.

Airsoft weapons shoot airsoft BBs. These BBs are normally housed in the weapon’s magazine. These mags generally connect to the airsoft weapon similar to the genuine weapons they are imitated. The kinds of airsoft gun magazines consist of real capacity, mid capacity, and high capacity mags.

Airsoft gun mags are made in multiple kinds like real capacity, mid capacity, and high capacity magazines. These styles usually involve AEG mags. Real capacity mags, or real-caps, imitate the amount of airsoft BBs a real weapon would store, which is typically about 24 to 30 BBs. Mid capability magazines, or mid-caps, permit more airsoft BB storage with capacities about 120 to 160 BBs. High capacity mags, or high-caps, offer airsoft gamers the greatest storage space with around 200 rounds of BB storage volume. One point to take note of about high-cap mags is that airsoft arenas often limit their use during games due to players firing way too much ammunition to spray-and-pray during gameplay.

Airsoft magazines have a series of internal channels and BB storage areas. When a BB is fired, the airsoft weapon releases the latch for a fraction of a second and loads another BB into the weapon out of the magazine. HPA, CO2, and GBB weapons, which use high pressure air or green gas, will frequently keep the gas or feed air in through the mag.

Airsoft rifle mags are usually used in automatic electric guns (AEGs) and some kinds of sniper rifles. The magazines are relegated to the type of AEG rifle and all of the types of that rifle are cross-compatible with the mags. Learn more about how the inner workings of airsoft weapons shoot BBs. The AEG mags are inserted into the weapon’s magazine insertion area. For instance M4 style AEG magazines would normally operate in all M4 style rifles from a short CBQ gun with a 10 inch barrel made by KWA to a designated marksman rifle (DMR) platform with a 24 inch made by Lancer Tactical or Elite Force. The exact same cross-compatibility would relate to AK47 AEG mags with swapability in between different AK rifle platforms. AEG rifle mags can hold in between 60 to 200+ airsoft BBs.

Airsoft SMG magazines AEG are usually separated by gun design and functional in between different submachine guns. Hecker and Koch H&K MP5 AEG magazines are made to work in different MP5s like the MP5K or MP5SD. P90, KRISS Vector, and TMP AEG magazines are developed in a similar way. These SMG mags also are available in real capacity, mid capacity, and high capacity versions with BB storage capacities ranging from around 24 airsoft BBs with real capacity mags to over 200 BBs with high capacity magazines. Rifle Magazines for Green Gas and HPA Systems Green gas rifles (consisting of GBB versions) and guns powered by high pressure air (HPA) typically have their own custom-made design depending upon the airsoft weapon brand. These magazines use air and gas to function so the magazines typically feature builtin gas reservoirs or are pre-tapped for HPA tank hookups. The magazines used in GBB guns accumulate gas in the mag so the rifle cycles every shot and feeds in the next BB. HPA pre-tapped magazines use HPA lines which are attached to the valves and let the pressurized air to stream in through the magazine. This setup feeds the airsoft BBs into the HPA weapon.