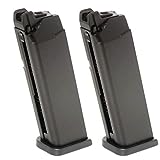 Metal Construction
Capacity – 23rd
Suitable for 6mm Plastic Bullet only
Weight – Approx 630g (315g each – 2pcs Pack)
Go to the middle of the page to read the complete Product Description.

Airsoft guns shoot airsoft BBs. These BBs are usually held in the weapon’s magazine. These magazines typically attach to the airsoft weapon similar to the genuine weapons they are imitated. The kinds of airsoft gun magazines consist of real capacity, mid capacity, and high capacity mags.

Airsoft mags have a series of internal channels and BB storage locations. When a BB is fired, the airsoft gun launches the latch for a fraction of a second and loads another BB into the weapon out of the magazine. HPA, CO2, and GBB weapons, which use high pressure air or green gas, will typically hold the gas or feed air in through the mag.

Airsoft rifle mags are most often used in automatic electric guns (AEGs) and some types of sniper rifles. See how airsoft guns work. The mags are specific to the type of AEG rifle and all of the types of that rifle are cross-compatible with the mags. The AEG magazines are inserted into the weapon’s magazine well.

Some airsoft AEG guns and machine guns use very large capacity magazines. They can store up to 1000s of BBs and provide massive amounts of suppressive fire for a squad or fireteam during fights.

Airsoft SMG magazines AEG are also separated by gun model and functional between different submachine guns (SMGs). These SMG magazines usually come in real capacity, mid capacity, and high capacity versions with BB storage capacities varying from around 24 airsoft BBs with real capacity mags to over 200 BBs with high capacity mags. Rifle Magazines for Green Gas and HPA Systems These magazines use air and gas to operate so the magazines often come with builtin gas tanks or pre-tapped for HPA tank hookups. The magazines used in GBB weapons keep gas in the magazine so the rifle cycles every shot and feeds in the next BB.