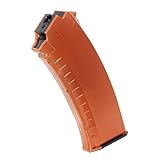 Made out of ABS polymer.
Replacement of standard magazine of Tokyo Marui Next Gen AK Series AEG.
Suitable for Tokyo Marui Gen 2 AK Series AEG.
Weight – Approx 179g
Go to the middle of the page to read the complete Product Description.

These magazines usually attach to the airsoft gun very similarly to the real weapons they are modeled after. The types of airsoft weapon magazines consist of real capacity, mid capacity, and high capacity magazines.

Airsoft gun magazines can be found in a handful of kinds like real capacity, mid capacity, and high capacity magazines. These types usually apply to AEG magazines. Real capacity mags, or real-caps, replicate the total of airsoft BBs a real weapon would hold in ammunition, which is generally around 24 to 30 BBs. Mid capability mags, or mid-caps, allow for more airsoft BB storage with capacities about 120 to 160 BBs. High capacity magazines, or high-caps, provide airsoft gamers the greatest storage space with around 200 rounds of BB storage volume. One thing to take note of about high-cap mags is that airsoft arenas often prohibit their use because they allow players using an excessive amount of ammo to spray and pray throughout games.

Airsoft magazines have a series of internal channels and BB storage spots. The BBs are normally pushed into these channels with a spring connected to the really far end. When the BBs are filled, they compress the spring creating stress. On the load end, a small latch holds the BBs in the magazine. When a BB is fired, the airsoft weapon launches the latch for a fraction of a second and loads another BB into the weapon out of the mag. HPA, GBB, and CO2 weapons, which use compressed air or green gas, will typically keep the gas or feed air in through the mag. This feeds BBs into the guns for these types of systems.

Airsoft rifle magazines are most often used in automatic electric guns (AEGs) and some types of sniper rifles. Find out how airsoft guns shoot BBs. The mags are particular to the type of AEG rifle and all of the types of that rifle are cross-compatible with the magazines. The AEG magazines are placed into the gun’s mag well.

Some airsoft AEG guns and squad automatic weapons like SAWs use very large capacity magazines. They can carry up to 1000s of airsoft BBs and provide massive amounts of suppressive fire for a unit or fireteam.

Airsoft SMG mags AEG are also separated by gun design and functional between various submachine guns. Hecker and Koch H&K MP5 AEG mags are made to work in various MP5s like the MP5K or MP5SD. P90, KRISS Vector, and TMP AEG mags are developed to be cross-compatible. These SMG mags also can be found in real capacity, mid capacity, and high capacity variations with BB storage capacities varying from around 24 airsoft BBs with real capacity mags to over 200 BBs with high capacity mags. Rifle Mags for Green Gas and HPA Systems These mags use air and gas to work so the mags often come with builtin gas reservoirs or pre-tapped for HPA tank hookups. The magazines used in GBB guns save gas in the magazine so the rifle cycles every shot and feeds in the next BB.

When compared to the AEG magazines used in rifles and SMGs, Airsoft pistol magazines are often less flexible. Pistols mags vary by type and frequently use CO2 or green gas (propane) kept in the magazine. The mag is placed into the handgun’s grip like the standard gun design. Handgun mags are often interchangeable between similar models of the exact same airsoft weapon manufacturer, but are frequently not cross-brand suitable unless they are particularly developed for that function. Learning about the specific styles and types of airsoft pistols can give you more insight to how their magazines function. The majority of airsoft pistol magazines save around 20 to 30 airsoft BBs.