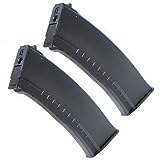 Made out of ABS material
Wire-Winding (String) System allow you to finish loading in less than 5 secs.
Suitable for 6mm Plastic Bullet only.
Weight – Approx 280g (140g each – 2pcs Pack)
Go to the middle of the page to read the complete Product Description.

Airsoft guns shoot airsoft BBs. These BBs are generally kept in the gun’s magazine. These magazines generally connect to the airsoft weapon similar to the genuine weapons they are designed after. The kinds of airsoft gun mags include real capacity, mid capacity, and high capacity mags.

Airsoft weapon mags are manufactured in a number of kinds like real capacity, mid capacity, and high capacity magazines. These styles most often apply to AEG magazines. Real capacity magazines, or real-caps, replicate the total of airsoft BBs a real weapon would keep in live ammo, which is normally around 24 to 30 BBs. Mid capability mags, or mid-caps, allow for more airsoft BB storage with capacities about 120 to 160 BBs. High capacity magazines, or high-caps, offer airsoft gamers the most storage with around 200 rounds of BB storage volume. One point to take note of about high-cap mags is that airsoft arenas often regulate their use during games because of players using way too much ammunition to spray and pray during gameplay.

About How Airsoft Magazines Work

Airsoft mags have a series of internal channels and BB storage locations. When a BB is fired, the airsoft gun launches the latch for a fraction of a second and loads another BB into the gun out of the mag. GBB, HPA, and CO2 guns, which use high pressure air or green gas, will frequently house the gas or feed air in through the magazine.

Airsoft rifle magazines are most often used in automatic electric guns (AEGs) and some types of sniper rifles. Find out how airsoft AEGs shoot BBs. The mags are specific to the type of AEG rifle and all of the types of that rifle are cross-compatible with the mags. The AEG magazines are inserted into the weapon’s mag well.

Some airsoft AEG guns and machine guns use very large capacity magazines. They can hold up to 1000s of BBs and provide massive amounts of suppressive fire for a squad or fireteam.

Airsoft SMG magazines AEG are similarly separated by weapon design and usable between different submachine guns. Hecker and Koch H&K MP5 AEG magazines are made to operate in different MP5s like the MP5K or MP5SD. P90, KRISS Vector, and TMP AEG mags are developed in a similar way. These SMG mags also come in real capacity, mid capacity, and high capacity versions with BB storage capacities ranging from around 24 airsoft BBs with real capacity mags to over 200 BBs with high capacity magazines. Rifle Mags for Green Gas and HPA Systems Green gas rifles (including GBB versions) and weapons powered by high pressure air (HPA) often have their own custom-made style depending on the airsoft gun brand. These mags use air and gas to function so the mags frequently include builtin gas tanks or pre-tapped for HPA tank hookups. The magazines used in GBB weapons accumulate gas in the magazine so the rifle cycles every shot and feeds in the next BB. HPA pre-tapped mags use HPA lines which are hooked up to the valves and permit the pressurized air to flow in through the magazine. This setup feeds the airsoft BBs into the HPA gun.

When compared to the AEG magazines used in smgs and rifles, Airsoft pistol magazines are typically less flexible. Handguns mags vary by type and often use CO2 or green gas (propane) held in the magazine. The magazine is placed into the pistol’s grip like the basic firearm design. Handgun magazines are frequently interchangeable in between comparable models of the same airsoft gun maker, however are typically not cross-brand suitable unless they are specifically designed for that function. Understanding the specific styles and types of airsoft handguns gives you a better understanding of how their magazines function. Most airsoft pistol magazines save around 20 to 30 airsoft BBs.