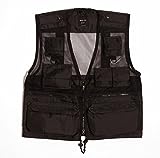 Rothco Recon Vest
Rothco makes quality outdoor and sports gear for all types of situation. Whether you are in a combat intensive environment, or if you are a recreational user, rothco will fit the lifestyle of many. Quality tested and performance driven, use rothco.

Nylon
Quality tested and ensured for maximum durability
Designed with only the toughest, roughest users in mind
Comfort and performance come hand in hand with rothco

The Rothco Recon Vest by Rothco works well for airsoft. Airsoft vests, plate carriers, and tactical loadout equipment are common for holding gear on the airsoft field. These vests and carriers make it easy for players to keep control of their equipment and quickly walk around the battlefield while having everything they require to win more missions. They also have a tacticool operator status appearance to them and protect team player’s bodies from incoming airsoft BBs.

Tactical airsoft vests like the Rothco Recon Vest offer a couple of layers of additional protection to help cushion the force of incoming airsoft BBs. Some vests have more than others and some vests include tough armor plates or ABS plastic scales. These airsoft vests have extra padding and torso safety, however nearly every vest will provide some defense from incoming airsoft BBs.

One difficulty confronted by playing with thick vests with rows of magazine pouches and a great deal of gear affixed to them is that players can not feel their hits very well. In these cases, team players should listen for their hits and call themselves out if their vest or equipment is struck by inbound airsoft BBs. Game players must follow the airsoft field or match guidelines.

There are several distinct types of vests and load-bearing equipment worn in airsoft. As a classification, an airsoft vest is a general term used to identify anything game players tactically wear on the upper half of their bodies and holds airsoft gear.

Pre-made airsoft vests are one of the most standard kinds of airsoft vests. These vests come ready-to-play out of the box and are also some of the less expensive vests available while still keeping good quality and resilience.

These vests are instantly usable and include sewn in magazine pouches, pouches which hold airsoft BBs, and other pockets. The magazine pouches are specialised to the vest models and typically can be found in M4 or AK47 designs. With pre-made vests, team players can typically attach a U.S. GI military web belt to the bottom of the vest. Here they can add things like dump pouches, drop leg holsters, and other belt pouches and extras. The airsoft vest back has MOLLE loop accessories for a CamelBak or other things like LED light sticks or a shotgun scabbard.

Given that these airsoft vests are factory constructed, they are well made with strong stitching and will generally last for a long period of time. We’ve seen a few of these vests used for so long the colors start to fade, however they still serve their gear carrying purpose. Lots of airsoft players start playing with a version of these vests, sell it later on, and upgrade to a more custom-made vest choice.

A more personalized and sophisticated airsoft vest is the tactical MOLLE airsoft vest design. These modular vests allow each pouch to be transferred and placed independently based upon the desired setup airsoft game players and tactical operators need. The MOLLE webbing employs a hook and loop strap system which enables gun magazine pouches, radio pouches, medical IAK pouches, utility pouches, and weapon holsters to be installed anywhere on the vest where the MOLLE panels are found. The resulting hundreds of different combinations, positions, and orientations empower tactical operators to decide on the customized MOLLE pouch set up for the specific role they are playing (like breacher, grenadier, SAW gunner, etc) or objective they are running.

The personalized feel and look of MOLLE airsoft vests are pretty awesome. The tactical vest platform and pouches are typically sold on their own or in kits which makes them more high priced than pre-made airsoft vests. A basic MOLLE vest can be pricey with the pouches costs increasing the expense. A fully packed MOLLE tactical loadout can cost hundreds of dollars depending on how many pouches and different types of MOLLE pouches are acquired. See if you can find MOLLE pouch sets to get your loadout set up if you have chosen to go the MOLLE vest route.

When looking for MOLLE vests, bear in mind airsoft companies make replicas of real world tactical vests. These airsoft knock-off pouches and vests run a fraction of the prices of the genuine equipment used by militaries, Special Forces (like Rangers, Naval Special Warfare Development ‘Dev Group’, and MARSOC) and other special ops teams.

The three parts of the system are MOLLE pouches, straps, and panels which are put together to produce the MOLLE airsoft loadout. MOLLE panels are the base located on airsoft vests. The MOLLE pouches have a MOLLE loop panel on the back of the pouch which permits straps to be tightly attached to MOLLE panel loops.

The whole MOLLE system comes together as operators pick the pouches they require for an airsoft vest loadout or mission, weave the MOLLE straps through the loops on the pouches and vest panels, and fasten the snaps on the straps to keep the pouches in place. The result is an extremely personalized airsoft vest with the appearance and feel of operator status.

Airsoft tactical vest plate carriers resemble basic MOLLE vests and many of these vests also have plate carrier compartments and capabilities. This makes it easy to use and change MOLLE pouches between vest plate carriers and standard MOLLE vests These tactical vests have internal pouches to hold genuine or replica ballistic level III3A plates or bullet-resistant plates. Airsoft team players use these plate carrier vests for an added coolness aspect and can even run realistic or imitation ballistic plates and panels to mimic a practical loadout or battlefield kit.

Tactical modular chest rig vests generally just have front and back panels that can hold ballistic rifle plates. They resemble plate carrier vests and similarly have MOLLE panels on the front and back for MOLLE pouches. These tactical vests are separate from MOLLE vests due to the fact that they are more low-profile and can be worn over or under other clothes like jackets, uniforms, vests, and bulky apparel fairly easily. The side straps on modular chest rigs also change more than standard plate carrier vests. Slicks are simply modular chest rig vests but without the MOLLE attachments which makes them smooth or slick. These type of airsoft vests are less effective for carrying gear because they do not have pouches. They are often chosen for props as civilian role game players or tactical kit builds for a particular period modeled after a famous military unit that employed them like the Navy Seals.

Airsoft half vests or gunfighter vests fall under this classification. Half vests are half of a tactical vest with a row of internal pouches in the front. They are handy to use for airsoft and can be put on easily in the course of an all-out battle hence the namesake. They usually have capacities for 6 M4 magazines in the front (or similarly sized weapon magazines) with MOLLE or taco pouches in the front for handgun magazines, admin pouches, medical equipment, and other add-on pouches. The harness is held in position by a set of shoulder straps and the back of the vest is open. This kind of airsoft vest can even be used over top of other types of equipment and vests.

Tactical load-bearing vests are a few of the most classic vests to employ for airsoft. These airsoft tactical vests include 6 integrated M4 mag pouches with 2 grenade pouches. The vest straps for the sides and shoulders adapt to little and big-sized airsoft game players which make this vest truly versatile.

Question: How many airsoft gun mags does the vest hold?
Answer: Generally around 4 to 6 depending on if they are M4 or AK47 design magazines. Take a look at the vest item specifications for storage capacity info.

Question: What type of elements are tactical vests made out of?
Answer: Tactical vests like this Rothco vest are usually made from several types of products consisting of CORDURA, webbing, nylon, rubber, and other similar textile products. The straps and closures are normally fastened with velcro, metal snaps, or plastic buckles. 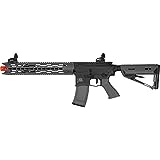