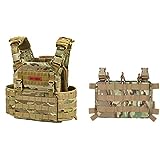 The OneTigris Multicam Tactical Vest & Triple Rifle Mag Pouch by OneTigris works well for airsoft. Airsoft vests, plate carriers, and tactical loadout equipment are often used for carrying equipment on the airsoft field. These vests and carriers make it easy for team players to keep control of their gear and easily get around the battlefield while having all the things they need to have to win more objectives. They also have a tacticool operator status look to them and give protection to participant’s bodies from inbound airsoft BBs.

Airsoft tactical vests typically have lots of pockets, pouches, and MOLLE accessory panels. This is a balancing act considering that it is a mix of carrying what you require in the field but not unnecessary amounts of gear. Avoid carrying so much gear that it weighs you down or stops you from moving easily throughout the airsoft field. Some commonly chosen things in a basic airsoft tactical vest loadout include the following: Extra airsoft weapon mags, sidearms like shotguns or handguns, extra airsoft BBs, red rags, powerbars, drinking water , radios, weapon repair items, and Leathermans.

Tactical airsoft vests like the OneTigris Multicam Tactical Vest & Triple Rifle Mag Pouch offer a few layers of extra fabric to aid in cushioning the force of incoming airsoft BBs. Some vests have more than others and some vests include plastic armor plates or ABS plastic scales. These airsoft vests have extra cushioning and torso safety, but nearly every vest will offer some shielding from inbound airsoft BBs.

One difficulty confronted by playing with thick vests with rows of magazine pouches and a great deal of equipment affixed to them is that game players can not feel their hits very well. In these cases, game players should listen for their hits and call themselves out if their vest or equipment is struck by inbound airsoft BBs. Players should follow the airsoft field or match guidelines.

There are a number of different types of vests and load-bearing equipment worn by players in airsoft. As a classification, an airsoft vest is a basic term used to define anything participants tactically don on the upper half of their bodies and holds airsoft equipment.

These vests are immediately usable and come with sewn in magazine pouches, pouches which hold airsoft BBs, and other pockets. With pre-made vests, team players can frequently connect a U.S. GI military web belt to the bottom of the vest.

Since these airsoft vests are factory constructed, they are very well made with strong stitching and will typically last for a long period of time. We’ve seen a few of these vests worn for so long the colors begin to fade, but they still serve their gear bearing purpose. Many beginner airsoft players start playing with a version of these vests, resell it in the future, and upgrade to a more customized vest choice.

Try to find the best kind of pre-made vest you want. Some have built-in magazine pouches for AR-15/ M4 magazines while others have AK-47 magazine sizing. Make certain the vest you are purchasing will work for holding your particular airsoft weapon type magazines. Different designs of pre-made airsoft vests are also readily available. They feature the following. Magazine carrier vest setups which feature 6x AK-47 to 12x M4 magazine slots (depending on size of magazine placed). Cross-draw pistol holster combos with a 3x or 6x magazine pouch on the opposite side. Rifle shotgun tactical vest pouch setups with shotgun shell loops inside pouches. EOD vests (explosives ordnance detection) with plenty of admin pouches. Grenadier vests with numerous grenade pockets for M203 shells.

A more advanced and customizable airsoft vest is the tactical MOLLE airsoft vest design. These modular vests allow each pouch to be moved and placed separately based upon the particular setup airsoft game players and tactical operators need. The MOLLE webbing employs a hook and loop strap system which permits weapon magazine pouches, radio pouches, medical IAK pouches, utility pouches, and weapon holsters to be mounted anywhere on the vest where the MOLLE panels are located. The resulting numerous different mixes, positions, and orientations empower tactical operators to pick the tailored MOLLE pouch set up for the specific function they are playing (like breacher, grenadier, SAW gunner, etc) or objective they are running.

The personalized look of MOLLE airsoft vests are excellent. Nevertheless, the tactical vest platform and pouches are normally offered for sale individually or in sets which makes them more costly than pre-made airsoft vests. A basic MOLLE vest can be expensive with the pouches costs increasing the costs. A totally packed MOLLE tactical loadout can cost hundreds of dollars depending on the number of pouches and different kinds of MOLLE pouches are acquired. If you have decided to go the MOLLE vest course, see if you can identify MOLLE pouch sets to get your loadout established.

The MOLLE system is an acronym that means Modular Lightweight Load-Carrying Equipment. This tactical equipment system explains pouches, panels, and straps which employ MOLLE attachments. The three parts of the system are MOLLE pouches, straps, and panels which are created to create the MOLLE airsoft loadout. MOLLE panels are the base seen on airsoft vests. They feature a series of loops that are applied to secure pouches to the best with straps. The MOLLE straps are typically made from nylon with a button snap and are threaded through the MOLLE panel loops and the similarly styled loops on pouches. The MOLLE pouches have a MOLLE loop panel on the back of the pouch which enables straps to be solidly hooked through to MOLLE panel loops.

The whole MOLLE system comes together as operators select the pouches they need for an airsoft vest loadout or mission, weave the MOLLE straps through the loops on the pouches and vest panels, and fasten the snaps on the straps to keep the pouches in place. The result is a super tailored airsoft vest with the look and feel of operator status.

Tactical modular chest rig vests generally only have front and back panels that can hold rifle plates. They look like plate carrier vests and similarly have MOLLE panels on the front and back for MOLLE pouches. These tactical vests are different from MOLLE vests due to the fact that they are more low-profile and can be worn over or under other clothes like coats, uniforms, vests, and bulky apparel fairly easily. The side straps on modular chest rigs also adjust more than standard plate carrier vests. Slicks are merely modular chest rig vests but without the MOLLE attachments which makes them smooth or slick. These type of airsoft vests are less useful for holding gear considering that they do not have pouches. They are typically used for props as civilian role game players or uniform builds for a particular era imitating a memorable military unit that employed them like the Navy Seals.

Airsoft half vests or gunfighter vests fall into this classification. Half vests are half of a tactical vest with a row of internal pouches in the front. They are handy to use for airsoft and can be put on efficiently in the course of an all-out battle hence the name. They generally have capacities for 6 M4 magazines in the front (or similarly sized weapon magazines) with MOLLE or taco pouches in the front for handgun magazines, utility pouches, medical equipment, and other add-on pouches. The harness is held in position by a set of shoulder straps and the back of the vest is open. This kind of airsoft vest can also be worn over top of other types of gear and vests.

Tactical load-bearing vests are a few of the most conventional vests to employ for airsoft. These vest designs were used throughout wars like Vietnam and Desert Storm. They hold a location in military history and now are adopted on tons of airsoft playing fields. These airsoft tactical vests feature 6 integrated M4 mag pouches with 2 grenade pouches. They have loops to tie in with a U.S. G.I. web belt where airsoft team players can add more pouches and ammo dump bags if needed. The back of the vest has connections for a buttpack. The vest straps for the sides and shoulders adjust to smaller and larger-sized airsoft players that make this vest definitely flexible.

Question: How many airsoft gun magazines does the vest hold?
Answer: Usually around 4 to 6 depending upon if they are M4 or AK47 design magazines. Take a look at the vest item details for capacity info.

Question: What type of elements are tactical vests made out of?
Answer: Tactical vests like this OneTigris vest are typically made from several types of products consisting of CORDURA, webbing, nylon, rubber, and other similar fabric products. The closures and straps are generally fastened with velcro, metal snaps, or plastic buckles.