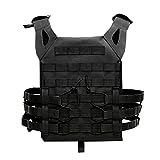 Airsoft is a shooting sport where players use airsoft guns like pistols, rifles, and shotguns to fire 6mm plastic BBs. The gameplay can focus on a range of mission based scenarios and team style games where participants and groups of participants contend to win. Airsoft teams can vary in size from a few game players to numerous squads, fire teams, and operational units based on the size of the playing field and player number. Larger airsoft fields and airsoft tourneys can host hundreds and even 1000s of participants depending upon the area of operations (AO).

Airsoft players typically dress in camo patterns during games together with headgear like tactical helmets and tactical vests set up with pouches. Each opposing airsoft group often uses a specific pattern to assist in recognizing hostile and friendly forces. The most common patterns consist of army fight dress uniforms (BDUs) like woodland camouflage, desert camo, digital camouflage, and MultiCam. If teams can not be separated by uniform, a colored band can be worn on the arm to designate opposing forces.

Military simulation airsoft, or milsim, is usually a large component of airsoft. Milsim is the art of imitating a tactical environment. Sometimes this involves a command structure, jeeps, and semi-realistic settings with imitation combat zone firecrackers or effects. Many of the airsoft missions, uniforms, and guns are replications of realistic firearms, military uniforms, and real-world missions out of historical events. The result of properly done milsim causes game players looking incredibly military-esque and suited up like spec ops.

Milsim airsoft weapons are based around the era of preferred weapons during the time of the mission. For instance, the M16A1 rifle has the vintage appearance of a Vietnam age assault rifle, while other airsoft rifles like the Heckler & Koch HK416 or IWI TAVOR TAR-21 are more current. In precise milsim gameplay, the weapons carried by players need to be consistent with the era, use associated optics, and be correctly modded.

Milsim fatigues can vary based on the forces and be based around the historical gear of the time. The tactical gear used usually has to match the uniform and be from the same age. A contemporary U.S. Navy Seal milsim uniform and loadout might integrate a Navy Working Uniform (NWU) camo pattern with a London Bridge Trading LBT-6094 Plate Carrier Gen II vest and a ballistic helmet like the Ops-Core FAST SF Super High Cut Helmet. Reproduction tactical gear and ballistic armor and helmets are often used instead of the authentic gear. This saves on cash because the genuine gear can cost 1000s of dollars and be lighter to use on the airsoft field.

The objectives undertaken throughout milsim operations include historical reenactments and objectives set as historical fiction. Have you ever wanted to storm the beaches of Normandy, fight for the 38th Parallel, or deal with the drug lords of Mogadishu at the time of Blackhawk Down? Milsim blended with airsoft is the way you can actively take part and experience military history.