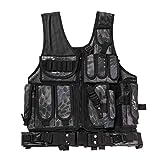 ADJUSTABLE SIZE: S~4XL for US mens clothing, waist from 35in/89cm to 57in/145cm, length from 20.5in/52cm to 22.5in/57cm. The tactical molle vest with detachable waist belt can be adjusted to fit the shoulder and waist size.
STRUCTURE: The detachable vest tactical has many pouches for different use. Patch can be attached to the vest adhesive.
HIGH QUALITY: The military training vest has tough nylon mesh material with mesh design, air ventilation, breathable and light. Only for games.
MOLLE SYSTEM: The back molle part is constructed with modular webbing for attaching additional gear and pouches. 2 D-rings help you hold carabineers or other equipments.
MULTIFUNCTION: The breathable vest is great for CS game, army fan, hunting, tactical training, mountaineering, outdoors activities, target shooting, airsoft, paintball and cosplay.

The Jipemtra Tactical MOLLE Airsoft Vest Adjustable Paintball Combat Training Vest Detachable for Hunting Mountaineering Outdoors (Python Black) by Jipemtra works well for airsoft. Airsoft vests, plate carriers, and tactical loadout equipment are standard for carrying gear on the airsoft field. These vests and carriers make it simple for airsoft players to maintain control of their gear and easily walk around the combat zone while having all the things they need to win more games. They also have a tacticool operator status style to them and give protection to team player’s bodies from incoming airsoft BBs.

Tactical airsoft vests like the Jipemtra Tactical MOLLE Airsoft Vest Adjustable Paintball Combat Training Vest Detachable for Hunting Mountaineering Outdoors (Python Black) offer a couple of layers of additional fabric to help cushion the impact of inbound airsoft BBs. Some vests have more than others and some vests include plastic armor plates or ABS plastic scales. These airsoft vests have additional cushioning and torso safety, however almost every vest will offer some shielding from inbound airsoft BBs.

One difficulty confronted by wearing thick vests with rows of magazine pouches and a great deal of gear attached to them is that team players can not feel their hits effectively. In these cases, game players need to listen for their hits and call themselves out if their vest or equipment is hit by incoming airsoft BBs. Players must follow the airsoft field or game rules.

There are a few different types of vests and load-bearing equipment employed in airsoft. As a definition, an airsoft vest is a general term used to define anything team players tactically wear on the upper half of their bodies and holds airsoft equipment.

These vests are immediately functional and come with sewn in magazine pouches, pouches which hold airsoft BBs, and other pockets. With pre-made vests, game players can frequently attach a U.S. GI military web belt to the bottom of the vest.

Considering that these airsoft vests are factory constructed, they are well made with strong stitching and will usually last for a very long time. We have seen a few of these vests used for so long the colors begin to fade, however they still serve their equipment bearing purpose. Many airsoft game players start playing with a version of these vests, resell it later on, and upgrade to a more customized vest option.

Try to find the right kind of pre-made vest you desire. Some have integrated magazine pouches for AR-15/ M4 magazines while others have AK-47 magazine sizing. Make sure the vest you are buying will work for holding your specific airsoft weapon type magazines. Different designs of pre-made airsoft vests are also readily available. They feature the following. Magazine carrier vest setups which feature 6x AK-47 to 12x M4 magazine slots (depending on size of magazine inserted). Cross-draw pistol holster combos with a 3x or 6x magazine pouch on the opposite side. Rifle shotgun tactical vest pouch setups with shotgun shell loops inside pouches. EOD vests (explosives ordnance detection) with many admin pouches. Grenadier vests with lots of grenade pockets for M203 shells.

A more adjustable and innovative airsoft vest is the tactical MOLLE airsoft vest style. These modular vests permit each pouch to be moved and placed individually based upon the specific setup airsoft players and tactical operators need. The MOLLE webbing employs a hook and loop strap system which enables weapon magazine pouches, radio pouches, medical IAK pouches, communications pouches, and weapon holsters to be installed anywhere on the vest where the MOLLE panels are found. The resulting numerous different mixes, positions, and orientations enable tactical operators to pick the customized MOLLE pouch set up for the specific function they are playing (like breacher, grenadier, SAW gunner, etc) or objective they are running.

The tailored look and feel of MOLLE airsoft vests are great. The tactical vest platform and pouches are usually sold individually or in packages which makes them more highly-priced than pre-made airsoft vests.

The MOLLE system is an acronym meaning Modular Lightweight Load-Carrying Equipment. This tactical equipment system describes pouches, panels, and straps which employ MOLLE mounts. The three parts of the system are MOLLE pouches, straps, and panels which are assembled to create the MOLLE airsoft loadout. MOLLE panels are the base located on airsoft vests. They feature a series of loops that are employed to hold pouches to the best with straps. The MOLLE straps are generally made of nylon with a snap and are threaded through the MOLLE panel loops and the similarly styled loops on pouches. The MOLLE pouches have a MOLLE loop panel on the back of the pouch which allows straps to be firmly hooked through to MOLLE panel loops.

The whole MOLLE system comes together as operators select the pouches they need for an airsoft vest loadout or objective, weave the MOLLE straps through the loops on the pouches and vest panels, and affix the snaps on the straps to keep the pouches in place. The outcome is an extremely personalized airsoft vest with the style and feel of operator status.

Airsoft tactical vest plate carriers look like basic MOLLE vests and many of these vests also have plate carrier compartments and attributes. This makes it practical to use and switch MOLLE pouches between vest plate carriers and basic MOLLE vests These tactical vests have internal pouches to hold genuine or reproduction ballistic level III3A plates or level IV plates. Airsoft players employ these plate carrier vests for an added coolness aspect and can even run actual or simulation ballistic plates and panels to mimic a functional loadout or battlefield kit.

They look like plate carrier vests and also have MOLLE panels on the front and back for MOLLE pouches. These tactical vests are separate from MOLLE vests since they are more low-profile and can be used over or under other clothing like jackets, uniforms, vests, and bulky clothing reasonably quickly. These kinds of airsoft vests are less beneficial for holding gear because they do not have pouches.

Airsoft half vests or gunfighter vests fall into this vest class. Half vests are half of a vest with a row of internal pouches in the front. This type of airsoft vest can even be worn over top of other types of gear and vests.

Tactical load-bearing vests are a few of the most conventional vests to employ for airsoft. These vest designs were employed throughout conflicts like Vietnam and Desert Storm. They hold a place in military history and now are used on loads of airsoft battlegrounds. These airsoft tactical vests feature 6 integrated M4 magazine pouches with 2 grenade pouches. They have loops to connect a U.S. G.I. web belt where airsoft team players can include more pouches and ammo dump bags if needed. The back of the vest has connections for a buttpack. The vest straps for the sides and shoulders adjust to little and big-sized airsoft participants that make this vest really flexible.

Question: How many airsoft gun magazines does the vest hold?
Answer: Generally around 4 to 6 depending on if they are M4 or AK47 style magazines. Take a look at the vest item details for storage capacity details.

Question: What kind of materials are tactical vests constructed out of?
Answer: Tactical vests like this Jipemtra vest are usually made from several types of products including CORDURA, webbing, nylon, rubber, and other similar fabric materials. The straps and closures are normally fastened with velcro, metal snaps, or plastic buckles.