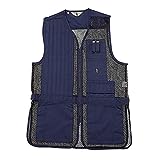 Bob-Allen Shooting Vest, Right Handed, Navy, Medium, 30178
Bob Allen Company was started in a parachute shop on the tiny Pacific atoll of Tinian towards the end of World War II. Bob Allen was a young, nationally known, clay target shooter before the war, who later parlayed his aerial gunner instructor duties into a combat assignment in the South Pacific. Bobs first product design was a long billed cap that helped keep the sun out of bomber crews eyes on their long flights to mainland Japan. Trading a ration of wartime Scotch in the parachute shop for each one of his prized hats, the Bob Allen Company was born. After the war, the hats found favor with shooters and soon Bob was selling hats, shooting vests, pouches and bags from the trunk of his car as he traveled the shooting circuit. Opening the first retail on the grounds of the Grand American Trapshoot, designing the first shooting vest, and the first non-military camouflage pattern were just a few of Bob Allens firsts”.

The Bob-Allen Shooting Vest, Right Handed, Navy, Medium, 30178 by Bob-Allen works well for airsoft. Airsoft vests, plate carriers, and tactical loadout equipment are common for holding equipment on the airsoft field. These carriers and vests make it easy for airsoft players to maintain control of their equipment and efficiently move around the combat zone while having everything they need to win more objectives. They also have a tacticool operator status appearance to them and safeguard team player’s bodies from incoming airsoft BBs.

Tactical airsoft vests like the Bob-Allen Shooting Vest, Right Handed, Navy, Medium, 30178 supply a couple of layers of additional material to help cushion the impact of incoming airsoft BBs. Some vests have more than others and some vests include plastic armor plates or ABS plastic scales. These airsoft vests have additional cushioning and torso safety, but practically every vest will offer some defense from inbound airsoft BBs.

One challenge confronted by using thick vests with rows of magazine pouches and a great deal of gear connected to them is that players can not feel their hits very well. In these cases, participants should listen for their hits and call themselves out if their vest or gear is hit by incoming airsoft BBs. Game players should follow the airsoft field or tournament guidelines.

There are a number of distinct types of vests and load-bearing equipment worn in airsoft. As a classification, an airsoft vest is a general term used to define anything players tactically wear on the upper half of their bodies and holds airsoft equipment.

These vests are immediately usable and come with sewn in magazine pouches, pouches which hold airsoft BBs, and other pockets. With pre-made vests, team players can frequently attach a U.S. GI military web belt to the bottom of the vest.

Since these airsoft vests are factory constructed, they are well made with strong stitching and will normally last for a long period of time. We have seen a few of these vests worn for so long the colors begin to fade, but they still serve their equipment bearing function. Many airsoft participants start out with one of these vests, resell it later on, and upgrade to a more customized vest solution.

A more advanced and personalized airsoft vest is the tactical MOLLE airsoft vest design. These modular vests allow each pouch to be shifted and placed separately based on the desired setup airsoft players and tactical operators require. The MOLLE webbing employs a hook and loop strap system which allows weapon magazine pouches, radio pouches, medical IAK pouches, communications pouches, and weapon holsters to be installed anywhere on the vest where the MOLLE panels are located. The resulting hundreds of different combos, positions, and orientations enable tactical operators to decide on the personalized MOLLE pouch set up for the specific function they are playing (like breacher, grenadier, SAW gunner, etc) or objective they are running.

The tailored look of MOLLE airsoft vests are excellent. However, the tactical vest platform and pouches are generally offered on their own or in packages which makes them more costly than pre-made airsoft vests. A standard MOLLE vest can be costly with the pouches costs increasing the bill. A totally packed MOLLE tactical loadout can cost hundreds of dollars depending on the number of pouches and different kinds of MOLLE pouches are purchased. See if you can identify MOLLE pouch sets to get your loadout set up if you have opted to go the MOLLE vest route.

When shopping for MOLLE vests, bear in mind airsoft companies make replicas of real world tactical vests. These airsoft knock-off pouches and vests run a fraction of the prices of the real equipment employed by militaries, Special Forces (like Rangers, Naval Special Warfare Development ‘Dev Group’, and MARSOC) and other unique ops teams.

The three parts of the system are MOLLE pouches, straps, and panels which are put together to produce the MOLLE airsoft loadout. MOLLE panels are the base found on airsoft vests. The MOLLE pouches have a MOLLE loop panel on the back of the pouch which permits straps to be solidly attached to MOLLE panel loops.

The whole MOLLE system comes together as operators select the pouches they need for an airsoft vest loadout or mission, weave the MOLLE straps through the loops on the pouches and vest panels, and affix the snaps on the straps to keep the pouches in place. The end result is an extremely tailored airsoft vest with the look and feel of operator status.

Airsoft tactical vest plate carriers resemble standard MOLLE vests and lots of these vests also have plate carrier compartments and features. This makes it easy to change and employ MOLLE pouches in between vest plate carriers and basic MOLLE vests These tactical vests have internal pouches to hold real or reproduction ballistic level III3A plates or ceramic ballistic plates. Airsoft participants employ these plate carrier vests for an added coolness component and can even run authentic or simulation ballistic plates and panels to imitate a functional loadout or battle rattle loadout.

Tactical modular chest rig vests usually just have front and back panels that can hold body armor plates. They look like plate carrier vests and also have MOLLE panels on the front and back for MOLLE pouches. These tactical vests are varied from MOLLE vests since they are more low-profile and can be run over or under other clothing like jackets, uniforms, vests, and bulky clothing reasonably easily. The side straps on modular chest rigs also adjust more than basic plate carrier vests. Slicks are merely modular chest rig vests however without the MOLLE accessories which makes them slick or smooth. These sort of airsoft vests are less practical for carrying gear because they do not have pouches. They are often used for props as civilian role players or uniform builds for a certain period modeled after a significant military unit that used them like the Navy Seals.

Airsoft half vests or gunfighter vests fall into this category. Half vests are half of a vest with a row of internal pouches in the front. They are handy to use for airsoft and can be worn easily in the course of an all-out fight hence the namesake. They typically have capacities for 6 M4 magazines in the front (or equivalently sized weapon magazines) with MOLLE or taco pouches in the front for pistol magazines, admin pouches, medical equipment, and other add-on pouches. The harness is held in position by a set of shoulder straps and the back of the vest is open. This kind of airsoft vest can even be worn over top of other kinds of equipment and vests.

Tactical load-bearing vests are a few of the most standard vests to wear for airsoft. These vest designs were used throughout wars like Vietnam and Desert Storm. They hold a location in military history and now are used on lots of airsoft battlegrounds. These airsoft tactical vests feature 6 integrated M4 magazine pouches with 2 smaller grenade pouches. They have loops to hook up a U.S. G.I. web belt where airsoft game players can feature more pouches and ammo dump bags if required. The back of the vest has connections for a buttpack. The vest straps for the sides and shoulders adapt to bigger and smaller-sized airsoft players which make this vest truly versatile.

Question: How many airsoft weapon mags does the vest hold?
Answer: Normally around 4 to 6 depending on if they are M4 or AK47 style mags. Look at the vest item details for storage capacity information.

Question: What kind of materials are tactical vests constructed out of?
Answer: Tactical vests like this Bob-Allen vest are normally made of a number of kinds of products consisting of CORDURA, webbing, nylon, rubber, and other comparable fabric materials. The closures and straps are normally secured with velcro, metal snaps, or plastic buckles.